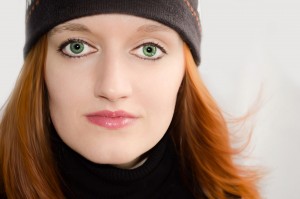 Ever wonder why you have blue eyes or what color your child’s eyes will be? Dr. Stewart Shofnershares information including new discoveries of what predicts eye color. Eye color is described as a polygenic phenotypic character determined by two distinct factors: the pigmentation of the eye’s iris and the frequency-dependence of the scattering of light by the turbid medium in the stroma of the iris.

In humans, the pigmentation of the iris varies from light brown to black, depending on the concentration of melanin in the iris pigment epithelium (located on the back of the iris), the melanin content within the iris stroma (located at the front of the iris), and the cellular density of the stroma.

Eye color is determined by variations in a person’s genes. Most of the genes associated with eye color are involved in the production, transport, or storage of a pigment called melanin. Eye color is directly related to the amount and quality of melanin in the front layers of the iris. People with brown eyes have a large amount of melanin in the iris, while people with blue eyes have much less of this pigment.

Eye color was traditionally described as a single gene trait, with brown eyes being dominant over blue eyes. It was believed that parents who both had blue eyes could not have a child with brown eyes. However, later studies showed that this model was not always accurate. Although it is rare, parents with blue eyes can have children with brown eyes.

Today, scientists have discovered that at least eight genes influence the final color of eyes. The genes control the amount of melanin inside specialized cells of the iris. While a child’s eye color can often be predicted by the eye colors of his or her parents and other relatives, genetic variations sometimes produce unexpected results. Learn more about each gene in a report provided by Hudson Alpha, Institute for Biotechnology.

Brown is the most popular eye color worldwide. Lighter eye colors, such as blue, hazel, violet and green, are found almost exclusively among people of European ancestry.

As for lighter eye colors green eyes are considered the most rare as only very few people that carry the genes responsible for green eyes. Only 1-2% of the entire human population have green eyes.

The appearance of blue and green, as well as hazel eyes, results from the Tyndall scattering of light in the stroma, a phenomenon similar to that which accounts for the blueness of the sky called Rayleigh scattering. Neither blue nor green pigments are ever present in the human iris or ocular fluid. Eye color is thus an instance of structural color and varies depending on the lighting conditions, especially for lighter-colored eyes.

Several disorders can also affect eye color. Ocular albinism reduces pigmentation of the iris, which causes very light-colored eyes and significant problems with vision. Oculocutaneous albinism also affects the pigmentation of to the eyes creating very light-colored irises. Another condition called heterochromia creates different colored eyes in the same individual. Heterochromia can be caused by genetic changes or by a problem during eye development, or it can be acquired as a result of a disease or injury to the eye.

For vision questions or to schedule an eye exam to ensure your eyes stay healthy, please contactShofner Vision Center online or call (615) 340-4733. Our staff is happy to assist you!