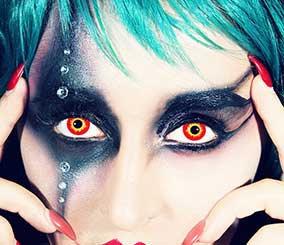 Late October for many includes celebrating Halloween with trick or treating or attending costume parties. While these late fall festivities can be fun, they can also be dangerous to your eyes. Every year several hundred trips are made to the ER for eye-related injuries stemming from Halloween costumes, masks and makeup. Some may choose to transform their eyes with novelty contact lenses. And while it may seem like good Halloween fun, improper use of contact lenses can be very dangerous to your vision.

According to Prevent Blindness, more than 80 percent of contact lens wearers are at risk for an eye infection from unsafe use. The CDC reports serious eye infections that can lead to blindness affect up to 1 out of every 500 contact lens users per year.  We have listed the top five most frightening stories reported from contact lens use.

Did you know that approximately one third of contact lens wearers report sleeping or napping in their lenses? Sleeping in contact lenses increases the risk for contact lens–related eye infections by six- to eightfold. Corneal infections might require surgical intervention and result in corneal damage and possible permanent vision loss.

To reduce eye infections, Dr. Shofner always recommends those that wear contacts to properly follow the care instructions (includes cleaning & storage). Improper cleaning and irregular replacement of contact lenses and contact lens cases have been linked to a higher risk of complications. “Keratitis is a painful eye infection often linked to improper contact lens use and can be prevented,” says Dr. Shofner.

Dr. Shofner also recommends obtaining prescription lenses that have been properly fitted to your eyes from a reputable vision care center and that are FDA approved to avoid the following risks:

If it’s been over a year since your last eye exam or if you are experiencing any vision changes, give us a call or schedule an eye exam online. We care about your vision and hope you have a Happy Halloween.

Image by SherieBeazley from Pixabay