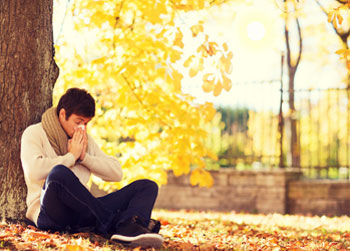 Have you ever desperately needed to sneeze, but it just won’t come?  Did you look at the sun, or a lightbulb, and successfully sneeze?  Some would say “Yes!” and think fondly of how well that worked.  But for the rest of us, bright sunlight doesn’t affect us that way at all.

There is a name for the quirk that affects about a third of the population in the world today – Photic Sneeze Reflex.   It is a phenomena that has interested philosophers and scientists for thousands of years. Aristotle reasoned that the heat of the sun on the nose was responsible for the sneeze.  Some 2,000 years later, English Philosopher Francis Bacon de-bunked the theory by walking outside with his eyes closed – the heat was still there, but he didn’t sneeze.  The new theory became that the sun made the eyes water, which in turn tickled the nose and caused the sneeze.  Of course today, we know that our tear ducts work much slower than the millisecond it can take us sneeze when we are exposed to a bright light.

Today’s generally held belief is that the wires in the brain get crossed, causing the photic sneeze reflex.  A sneeze is usually triggered by an irritation in the nose sensed by the trigeminal nerve.  This nerve is close to the optic nerve, which is what would sense a sudden bright light entering the retina.  As the optic nerve tells the brain to constrict the pupils, the trigeminal nerve mistakenly thinks the message is intended to indicate an irritation in the nose, and causes the sneeze.  It is amazing how much information fires from our nerves through our brain and back with unbelievable speed!

Because the phenomenon is harmless and not linked with any other medical condition, not much research has been fielded to study the reflex.  Luckily however, some scientists are interested in studying this because of the potential insights into migraine headaches and epileptic seizures.  Migraine sufferers often have photophobia, or an extreme sensitivity to light, and epileptic seizes can be triggered by flashing lights.  If scientists could learn more about the gene that causes the reflex, they may be able to learn something about the visual pathway and other reflexes that affect these diseases.  With very limited studies conducted, one thing we do know is that the trait is autosomal-dominant, meaning that the gene is neither on the X nor the Y chromosome and only one copy of the gene has to be present for the person to have the reflex.  If you have it, it is likely that half your children will too.

The best news is the simplicity of the cure!  All you have to do to negate the reflex is put on sunglasses before you go outside!  For all your eye protection needs, visit us at Shofner Vision Center.